Judge Kristin L. Rosi has been on the bench since 2007 and serves as the Chief Administrative Law Judge for the California Department of Insurance. Judge Rosi is also a Mental Health Hearing Officer and Judge Pro Tem for the Alameda County Superior Court and is a Senior Adjunct Professor at Golden Gate University. Prior to taking the bench, Judge Rosi spent 12 years at the Public Employment Relations Board, where she represented the agency at the California Supreme Court and Court of Appeal.

Judge Rosi is active in a number of judicial organizations, serving as President of the International Association of LGBTQ+ Judges, and Chair of the National Association of Women Judges’ LGBTQ Committee. Judge Rosi is also past-Chair of NAWJ’s Administrative Judiciary Committee and New Member Committee. She currently chairs the American Bar Association’s Judicial Division Program Committee and serves as a Commissioner on the ABA’s Sexual Orientation and Gender Identity Commission. Judge Rosi also recently completed a four-year term on the National Conference of Administrative Law Judiciary’s Executive Committee.

Judge Rosi is also passionate about equal access to justice. She currently serves as Chair of the California State Bar’s Council on Access and Fairness, where she divides her time between expanding loan repayment options for law students and working to diversify the law school pipeline. In 2021, the California Supreme Court appointed Judge Rosi to its Blue-Ribbon Commission on the Future of the Bar Exam. 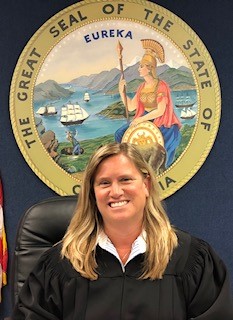