The Honorable Fumiko Hachiya Wasserman was appointed to the Superior Court of California, Los Angeles County in 1989. Her assignments have included serving in appellate, civil trials, felony criminal trials and juvenile matters. She was a past Presiding Judge of the South Bay Municipal Court.

Judge Wasserman was recognized by the Judicial Council for her service as Chair of the Governing Committee for the Center of Judicial Education and Research, which develops and provides required judicial training for appellate justices and bench officers in California. She has taught judges at the California Judicial College and at the National Judicial College. She also taught students at Loyola Law School and undergraduates at USC. She co-authored publications for the Continuing Education of the Bar, including topics about civil discovery, motions under the California Anti-SLAPP statute and driving under the influence law.

Judge Wasserman served on the Commission on Judicial Performance and the California State-Federal Judicial Council. She has participated in numerous advisory committees, court judicial organizations and bar committees, including the Judicial Council’s Access and Fairness Advisory Committee. She has been a member of the Board of Directors of the Los Angeles Biomedical Research Institute, Board of Governors of the Asian Pacific American Women’s Alliance and the Advisory Board of the Japanese American Bar Association of Los Angeles. She is the chair of the California Law Academy Support Council and serves as a Southern California Regional Co-chair.

Prior to her judicial career, she was the first Asian female to be appointed in the United States as an Assistant United States Attorney. She served in the Civil Division for the Central District of California. Her legal experience includes serving as a law clerk of the Honorable Terry J. Hatter, Jr. She was a Deputy City Attorney for the City of Los Angeles and an associate in a law firm. 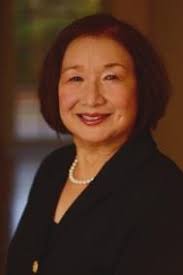